Latency Is An Annoying, But (Usually) Easily Fixed, Problem

According to Wikipedia’s definition of the word, “latency,” it’s the delay caused by the conversion of the analog sound into the digital sound. If you’re new to audio engineering and using digital audio workstations like me, you’ll probably want a simpler definition which is pretty understandable.

In layman’s terms, latency, essentially, is the delay between when you play the note and when you actually hear it expressed in the sound system. In other words, it’s when you play a note and it takes a second for you to hear it.

To explain it one more time for clarity, your computer and interface need time to convert the signal into a sound, even more so if you’re connected by Bluetooth or through an alternative method that isn’t 100% appropriate.

For instance, if you have GarageBand playing on your computer and your computer is hooked up to a Bluetooth speaker, you’ll probably find that whenever you play a note on your keyboard, there’s a delay between when you play the note, and when you can actually hear it through the speakers.

It’s a really annoying problem, however, that’s why you have to have a speaker system connected, directly through a cable to your computer, rather than through Bluetooth.

With that said, a Bluetooth speaker works just fine when you’re playing music directly from your computer from iTunes, YouTube, Spotify, or some other music platform. On the other hand, there are products like the iLoud Micro Monitors from Amazon that have the best of both worlds, which means they have both Bluetooth and wired capability which is why I got them.

In the case where your computer is converting the analog signal from an instrument to a digital signal, it would be best to use the iLouds with the Bluetooth disconnected, because then there won’t be any latency. Usually, latency is caused by some kind of problem with one’s set-up and gear, but in many cases, it’s easy to fix just by changing a few things.

There’s an old saying that goes, the simplest solution is usually the right one – one reason why I recommend a simple program like PianoForAll (from their site) if you want to learn keyboard for music production – and I believe that’s the case for many things in life, especially in the case of using DAW’s and making music.

If you’re experiencing latency problems with your MIDI keyboard into GarageBand, try the simplest solutions first.

1) Disconnect all of your gear from your computer and restart it.

2) After you’ve turned it back on and re-booted GarageBand, reconnect all of your gear and try it again.

Assuming that you’ve probably already tried this, I have over a dozen more solutions for you.

1) Save your file. Assuming that you’re an absolute beginner, you just go into the File setting, and click “Save,” or “Save As.” Most people know how to do this, so I won’t bother uploading pictures.

Even though this is a really simple solution, it works quite a bit, especially for those who have an old computer, and don’t have enough RAM to properly run a software that uses a lot of data.

2) Use your MacBook’s built-in speakers, instead.

For whatever reason, this works for some people, probably because of the way they’ve connected their speakers to their computer.

Like I noted above, if you’re experiencing this nagging problem, it may have something to do with the way in which you’ve hooked up speakers to your computer. Using a Bluetooth speaker, in most cases, is not going to work.

So, 1) make sure you’re directly connecting your sound system to your computer, through the appropriate cables, depending on what system you’re using. Don’t use a Bluetooth sound system.

Just change the configuration for a moment, and then turn it back to the way that it was.

1) Go to the GarageBand menu on the top left-hand corner in the toolbar on top. 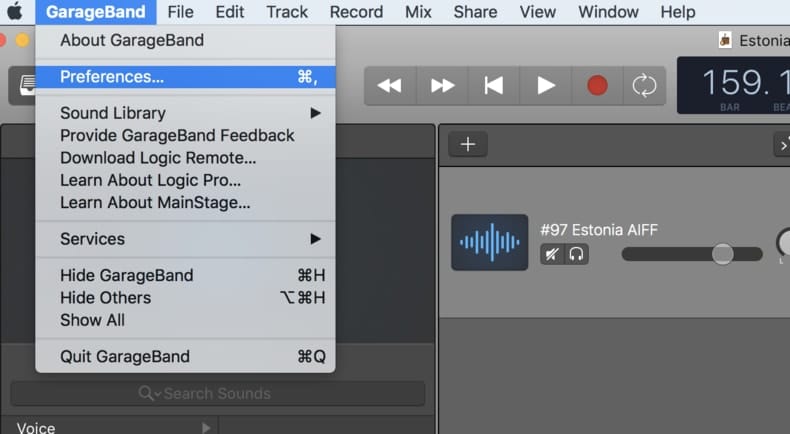 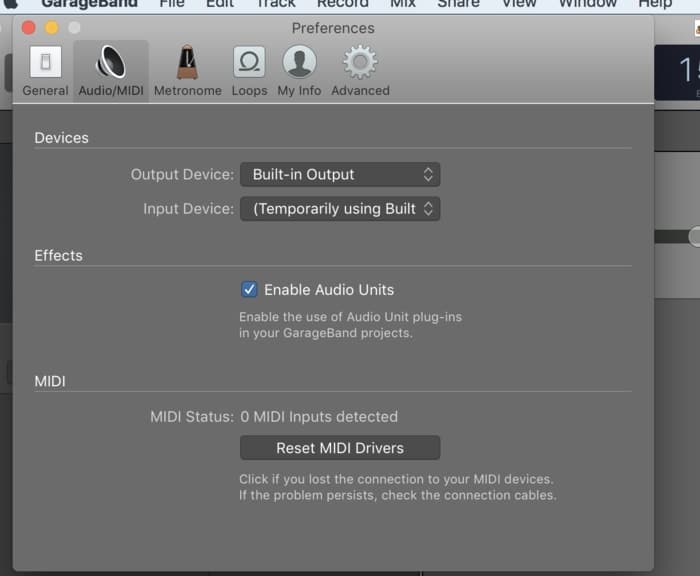 4) Change your Audio input and output to something else, and then switch it back again. 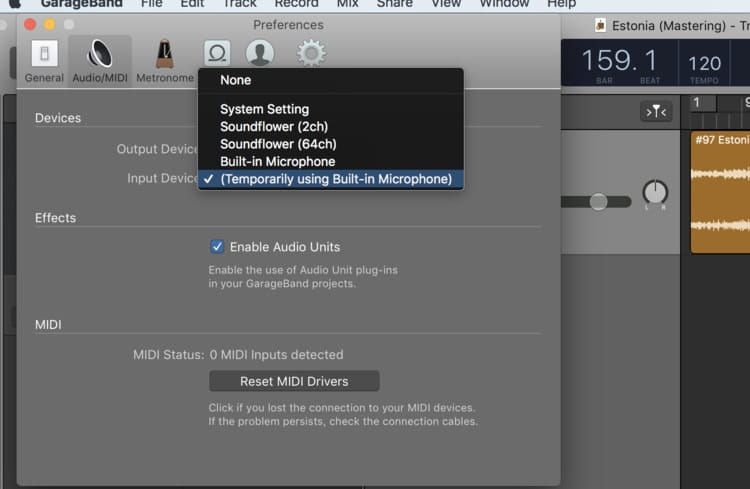 In my Audio-MIDI settings, you can see that it says SunFlower.

This is just an audio device on my computer that allows me to record videos on QuickTime, while also recording the screen at the same time. It’s basically a MacGyver-style version of ScreenShare, except free (but admittedly not as good, although, as I talked about in my guide, I do use ScreenFlow now and so should you).

1) Update to the latest edition of GarageBand.

2) Typically, this can be done through the App Store. When you click on the App Store icon, it should bring up all of the updates that are available on your computer.

Now, some people might contest this solution, but the truth is that developers usually issue updates for a reason. They’re fixing bugs and cleaning up the program so it’s easier to use.

I always use the latest edition of whatever software I’m using, just to avoid problems.

1) Make sure you’re connected to GarageBand using an appropriate Audio Interface like the Focusrite Scarlett 2i2 from Amazon.

Now, obviously there are a million of these products to buy, but I’m using a Focusrite Scarlett 2i2, although, I had previously used the Saffire 6USB for approximately 8 years without any problems.

1) Make sure your audio interface is connected to GarageBand.

2) Where it shows “Software Instrument” setting or Microphone setting, there should be a control at the bottom of the pop-up that says: “Input.”

When recording with a guitar or some other external advice, you need to either click on the Guitar icon, or the microphone icon, depending on what you’re using. 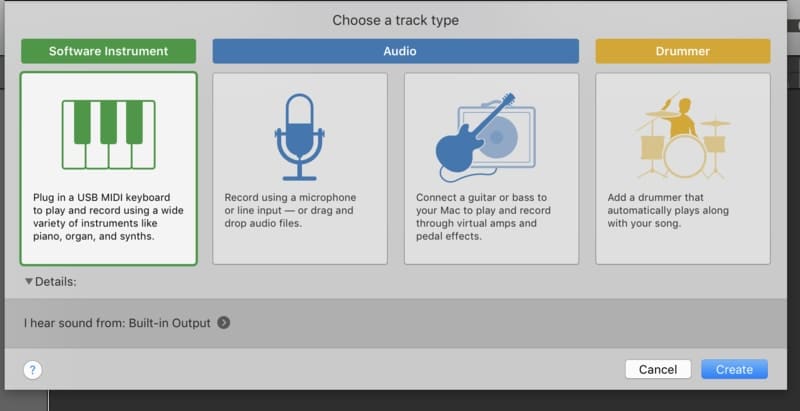 Make sure you select the one that is connected to your Audio Interface.

3) This should bring up a new track-header. A track header is where the audio is shown in your DAW. 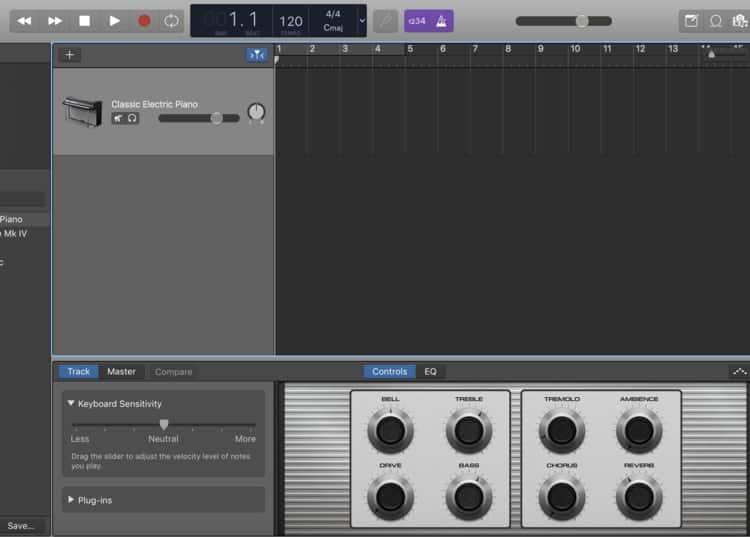 4) After it’s been brought up, you should be able to see the bottom portion of the DAW, which says, “Recording Settings” and “Plug-Ins.”

6) Click on the input button right beside where it says “Input.” 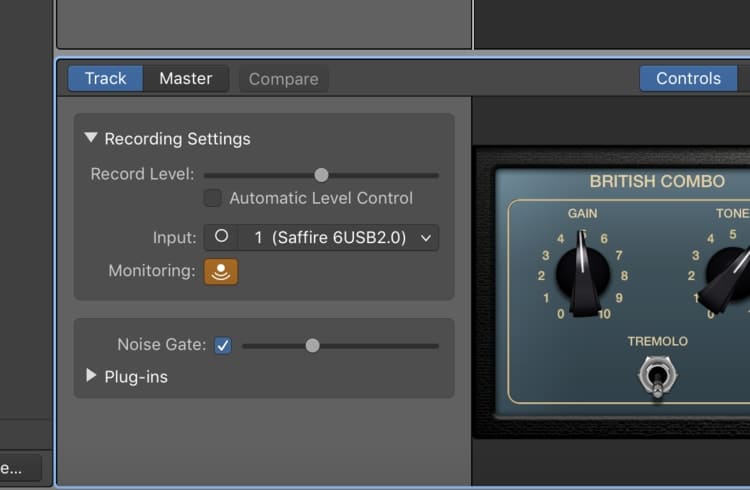 While you might own a different audio interface, this website has a useful explanation for why you may, still, be experiencing latency issues even after trying all of the aforementioned solutions.

1) Make your that whenever you’re playing back your audio recording in GarageBand, the “Monitor” button is turned off. The “Monitor button,” (the symbol that looks like an upside down Wi-Fi signal); there should only be one turned on and yellow when you’re recording. 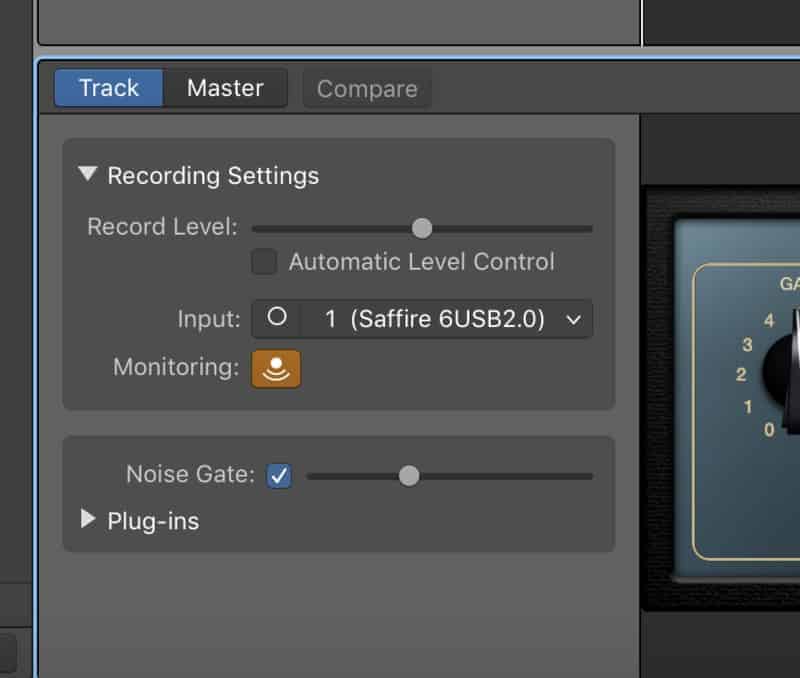 2) Additionally, having multiple tracks with multiple “Monitor” buttons turned on, might cause some problems. Only have one going at a time.

The reason for why this causes latency is because your DAW is using too much power by having all of the different monitors on.

Like it was mentioned above, latency is a problem when your computer is slow to convert a signal into the desired sound, whatever that sound may be, your guitar or microphone, etc.

1) Make sure that you’re only running 1 software, maybe 2 at once.

The reasoning for this is that if you’re running more than one software at a time, your computer is working too hard to process the signal, thus, there’s a delay in the transfer from your instrument, to the speaker.

1) Another way to deal with latency is to delete large, old files that are taking up too much RAM on your computer, which is similar to how you would minimize crashing (my guide) as well.

I used to run the latest issue of GarageBand on my MacBook Pro from 2010, and due to the sheer amount of data I had on it –   as well as the decreased strength of its processor and age of the computer –   I had latency problems, and in many cases, GarageBand would crash altogether.

These days I’m using a 2017 MacBook Pro, although, I would recommend one like this from Amazon instead because it has more storage space, faster processing speed, and is an all-around better computer. A solid computer that can handle music production is how you eliminate problems like latency at the source.

Another possible issue is something with your plug-ins.

Plug-ins actually use quite a bit of power, especially mastering plug-ins or simpler ones like compressors and multi-pressors etc.

Try disabling some of your plug-ins connected to your instrument.

2) Bring up the bottom part of GarageBand where it says, “Recording Settings” and “Plug-Ins” beneath it.

4) It should drop down the menu where it lists all of your plug-ins. 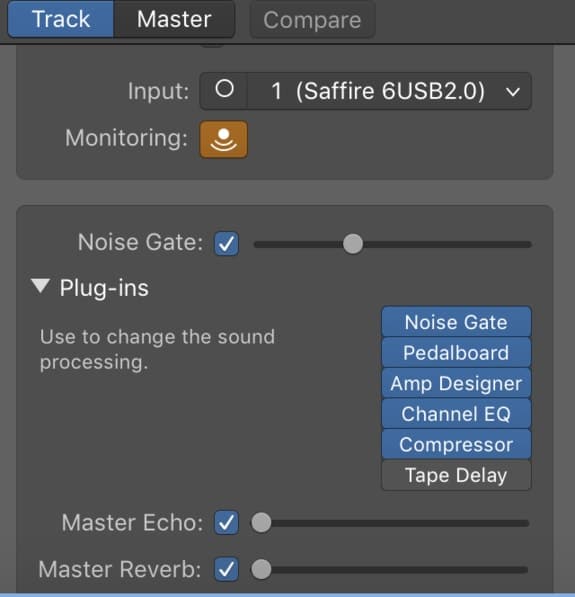 5) Click on one of them. In the latest issue of GarageBand, they’re colored blue.

6) It’ll bring up the settings in the top-left corner. 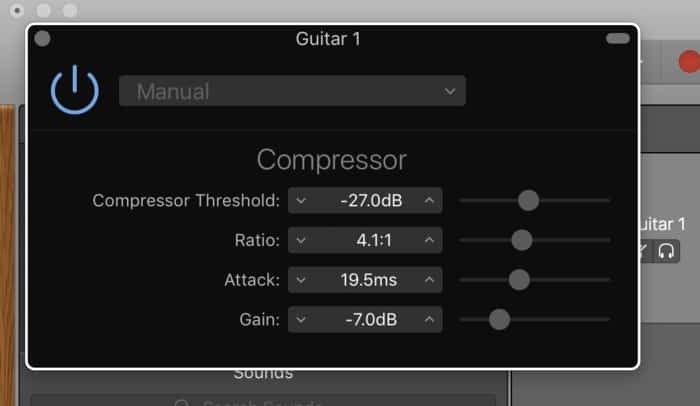 7) Click on the power button that looks like a circle with the top part cut out of it, and a completely straight vertical line running through the center.

8) Now go through each plug-in, turning them off, one-by-one, to see if one of your plug-ins are causing the problem.

It’s for the same reason mentioned above. Your computer is working too hard to acquire the signal and turn it into a sound, so there’s a delay or a lag.

You don’t necessarily need expensive headphones for this process. You just need headphones plugged directly into your unit to avoid latency problems cause by a Bluetooth connection.

Related to the other solutions above, increasing your computer’s onboard RAM will likely make a difference.

1) Add one gigabyte of RAM and that should help your computers processing system.

1) Record only one track at a time.

Now, this last solution has more to do with general connectivity problems, including crackling and popping, and less to do with latency, but it’s worth noting.

In a book I read recently from an audio engineer, he explained that one of the things he wishes he would’ve known earlier was the way that cables are usually the root of a recording engineer’s problem.

Sometimes, just buying a new cable will solve the problem, and save a person hours of their time troubleshooting all of the different causes of a problem, that turns out, is actually quite a bit simpler than they initially expected.

For instance, for a while, I was wondering why my guitar was crackling in my DAW through my audio-interface, but it turns out that all I had to do was change the 9-Volt battery in my guitar’s active (rather than passive) pick-ups.

This solution is a bit of reach, but I’ll list it anyway.

If GarageBand is crashing a lot, you’re having other issues, or your system is almost 10 years old like mine was, maybe it’s time to invest in a new machine.

However, it should go without saying that this is an absolute last resort, and by no means should a person look to get a new computer before trying any of the solutions listed above.

What is Latency And How Do I Fix It In Garageband

Assuming that your problem was fixed by ditching the Bluetooth speaker, which is usually the case, you’re probably in the market for something that won’t cause latency.

I recommend Audio-Technica Studio headphones for music production, which will not only fix your latency problem in this case, but they’re also great for making a great sounding and well-balanced mix. You can read more about them here.

They’re the ones I use and I haven’t looked back. I have more recommendations in my recommended gear page as well at this link.

Anyway, I hope this was helpful to you.

Make sure to share it on social media if this was of use to you.