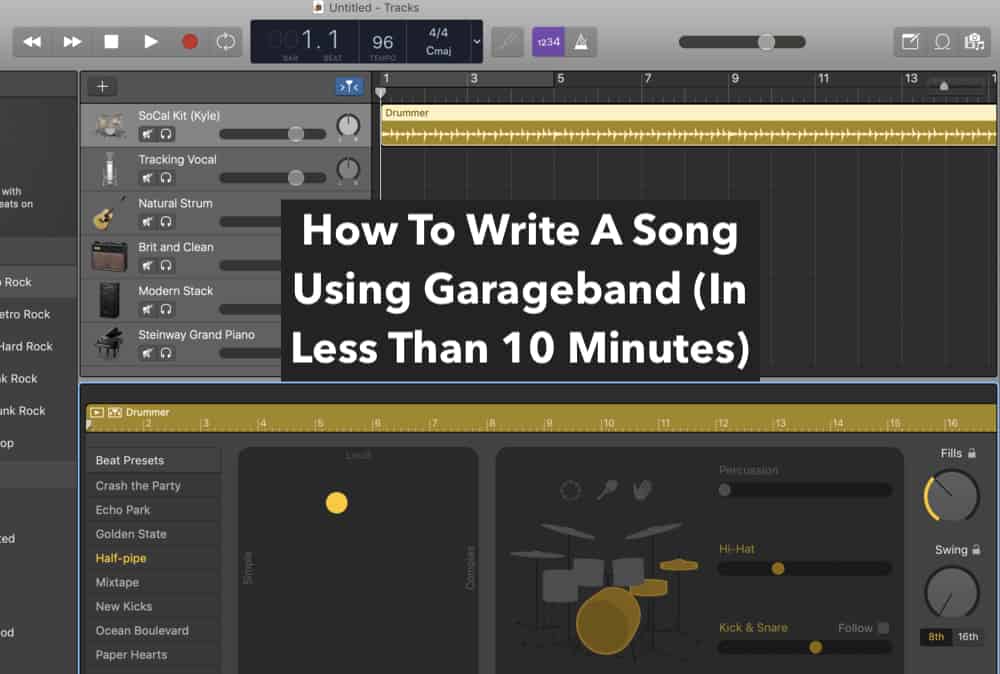 In this tutorial today, I’m going to show you how to write a song using Garageband within 10 minutes.

So, how does one actually write a song?

I would say that the number one thing you need to know for writing a simple song is just simple triads.

Triads are three-note chords. For instance, the notes C, E, G, are the notes of the C Major chord. A triad is made up of the root, the third, and the fifth.

In the image you can see below, you can see the notes of Garageband’s Musical Typing, and the highlighted notes make up the C Major Scale.

When creating chords, you just have to remember to skip a note between each one. For instance, a chord goes from C to E, to G, skipping the notes of the alphabet between those notes, and instead, using every other note of the scale.

In total, there are seven notes in Western music, C, D, E, F, G, A, and B. Other cultures employ micro-tonal systems, but truthfully, the Western style is probably the easiest to understand and without a doubt, the most useful.

Understanding that a chord is made up of the root, third, and the fifth, allows us to continue building other chords from the same set of notes of the C Major scale.

Explained in another way, if you count up from C, you’ll notice that E, is the third note, and then G is the fifth. C is the root because it’s the first note of the chord. Fairly intuitive.

I could get into accidentals and all of that other stuff, but we’re going to try and keep as much theory as possible out of this tutorial, with the exception of the very basic fundamentals. We don’t want to cause any unneeded confusion.

Moving on, the aforementioned notes, C, D, E, F, G, A, and B, are the notes of the C Major scale, essentially, the foundation of Western music, and the scale on which the rest of theory harmony is based.

Using the concept of triads, we can build other three-note chords using the C Major scale as shown above.

The first one we mentioned was the C Major Triad: C, E, and G.

Let’s make another triad using notes of the same scale, but simply moving over one: D, F, and A.

The notes, D, F, and A, is the next triad of the C Major scale, starting from D, and then counting up to the third: F, and then the fifth, A.

The notes, D, F, and A, make up the D Minor Chord because the second chord of every major scale in Western music theory is a Minor chord.

Essentially, you can just continue moving up from the scale from there, using E as the next root, we make the chord, E, G, and B, which is another Minor chord, the E Minor chord.

F, A, C, is the F Major chord, the fourth triad of the C Major scale. I hope you can see the pattern from here.

The chords of the major scale are typically illustrated using Roman numerals, as you can see below:

The final one with the ‘º’ symbol, means it’s a diminished triad, another type of chord. There are other types of chords as well, but we’re not going to get into that today.

Each roman numeral responds to the notes of the Major Scale. I’ve illustrated this below:

Now that I’ve explained the fundamentals of the Major Scale to you, we’re going to build a common chord progression, and this will be the basis of the song.

I-V-IV is, perhaps, the most common chord progression. Explained in another way, it’s the first chord, the fourth chord, and the fifth chord.

The ‘V’ chord, is a dominant seventh, which means that it has the 7th note of the scale in the chord, hence the number ‘7’ attached to the end.

Counting up from G, using the notes of the C Major Scale, we can see there is the G (root), B(third), D(fifth), and then the F(seventh).

2) Play The Chords On Your Instrument Of Choice

Now that we have a common chord progression laid out, we can open Garageband’s Musical Typing feature, using the (Command + K) button, and then we’ll play those notes along to a metronome.

What I normally do, is I play it using a piano first, and then when I think it sounds good, I’ll change the software instrument track to something else afterward.

In this case, I used the “Wooden Chimes” under the “Apreggiator” section.

It’s important to note that it’s crucial to have the MIDI notes fall exactly on the grid-line. This ensures that it’s on time, that way when you create a drummer track later, the instrument will be synchronized with the drums.

The progression ends up looking like what I’ve illustrated in the image below:

You can also use the quantizer function, however, in the smart controls of Garageband. Set it to 1/16 note, and increase the quantize to 100 to snap all the MIDI notes to the grid.

3) Copy and Paste the MIDI Region Into A New Software Instrument Track: an Arpeggiator

To first start making songs simply like this, we can use an Arpeggiator to make it sound less basic.

If you want to make the song more sophisticated, we can do many different things, including playing the notes of the chords individually, or, creating different chords using the same scale, altogether.

One of the greatest things about using a DAW, such as this one, is that you can quickly make all kinds of additions to a song, simply by creating a new instrument track and then copy and pasting the MIDI notes into it.

A lot can be done with a few simple commands.

For the drummer track, you just have to hit the (Command + Option + U) function to add your drummer of choice.

In this case, I just used Smash (Jessie)’s, Ring The Bell, and Wave The Flag.

Make the drummer track the same amount of bars as the software instrument tracks to make the drumming cohesive.

A lot can be done with the Drummer Track in Garageband. If you want to read more about it, I suggest you check out this article here.

I hope this has helped show how easy it is to quickly make a song using Garageband.

In the section below, I’ve shown additional examples of building chord progressions in a minor key, which is, essentially, the same principle.

Another very useful progression, that is most commonly known for being in jazz music, is the ii-V-I progression, which is the second chord, the fifth chord, and then the root chord (the first chord of the scale).

To illustrate these principles again, we’re going to create the aforementioned progression using the notes of the C Major Scale.

That means, we’re going to build triads based on the 2nd, the 5th, and the 1st notes of the C Major scale. What does that look like?

Here are the notes of the C Major Scale once again:

The triads made up of the root, third, and then the fifth will look like this.

You can play the notes together as chords, along with the Drummer Track, play them individually, or grab your guitar or whatever instrument you play, and you have an entirely different sounding progression.

There are not only one, but two common chord progressions in the key of C Major.

The beauty of this technique is that you can use it across every single key signature and Major Scale, as well as ever minor scale, including the other scales in Western music theory, such as the Melodic Minor Scale, the Harmonic Minor Scale, the Double Major Harmonic scale, and so on and so forth.

If you’ve grasped the concept behind this short tutorial, I recommend you move on over to my article about modes and how to use them as a Garageband music producer.

In my personal opinion, you won’t find another article that’s better than the one I’ve written, as most articles about modes miss the point of them entirely.

In the YouTube video, you can see below, you’ll see that I built a song in less than five minutes by using this technique. It’s really not complicated.

Chord Progressions in a Minor Key

Let’s quickly use a Minor Key Signature to illustrate this point once again, but using a different key.

We’ll go with the relative minor of C Major, A Minor.

***Relative minor means that it has the same notes as the major scale, they’re just in a different order.

Using the notes of A Minor: A, B, C, D, E, F, G, and A, again, we can apply the same concept as illustrated above, to create something entirely unique.

Then we’ll go to the fourth note of the A Minor Scale, D, and then count up by every other note from there.

The D Minor Chord is the second note of C Major as well.

Then, we’ll use the fifth note of the scale, E to create the next triad:

These notes are the first (i), the fourth (iv), and the fifth (v) chords of the A Minor Scale.

***They are also the 6th, the 2nd, and the 3rd notes of C Major. Remember, the two scales have the same notes, they’re just in a different order.

You’ll notice that the roman numerals are now lower-case, which signifies they are minor chords because we’re in a minor key.

The chords of the minor scale, laid out using the traditional roman number format looks like this:

In the Key Of A Minor, those Roman Numerals equal the chords shown below:
A Minor = i

To make a song using these chords, it’s as simple as either playing them together, or individually, along with to a backing track or drummer track, and voilà, you have a song.

What I normally like to do, is I create the chord progression with the piano, just to hear what it sounds like on its own, and then I change the software instrument track to another instrument.

As I mentioned above, I’ll copy and paste the notes and create an entirely new software instrument track to fill out the sound, whether it’s with an Arpeggiator or another one of Garageband’s instruments, like the String Movements in the Soundscape option.

If you wanted to make another chord progression with a Minor Key, you would just have to use the same principle. Just take the notes of the A Minor scale, and then build triads from it.

Anyway, I hope this tutorial was helpful to you. Make sure to check out the YouTube video for further illustration.

If you’re interested in learning more theory, which I highly recommend, grab a copy of Mark Sarnecki’s Complete Elementary Rudiments as well as the Answer Book from Amazon. You can read more about it in my review of the book at this link here.

link to How To Automate EQ in Garageband

A tutorial on how to automate the equalizer in Garageband. This article also explores the automation presets.

A tutorial explaining how to simply connect your MIDI controller to Garageband iOS, as well as some useful tips and tricks.

We use cookies to ensure that we give you the best experience on our website. If you continue to use this site we will assume that you are happy with it.Ok